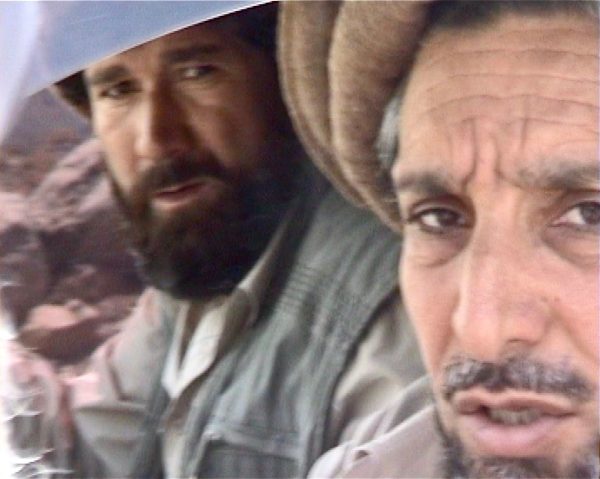 Massoud leaving Bazarak in the Panjshir after our interview in August 2001, roughly three weeks before his assassination. Photo: Pepe Escobar

It’s impossible not to start with the latest tremor in a series of stunning geopolitical earthquakes.

Exactly 20 years after 9/11 and the subsequent onset of the Global War on Terror (GWOT), the Taliban will hold a ceremony in Kabul to celebrate their victory in that misguided Forever War.

Four key exponents of Eurasia integration – China, Russia, Iran and Pakistan – as well as Turkey and Qatar, will be officially represented, witnessing the official return of the Islamic Emirate of Afghanistan. As blowbacks go, this one is nothing short of intergalactic.

The plot thickens when we have Taliban spokesman Zabihullah Mujahid firmly stressing “there is no proof” Osama bin Laden was involved in 9/11. So “there was no justification for war, it was an excuse for war,” he claimed.

Only a few days after 9/11, Osama bin Laden, never publicity-shy, released a statement to Al Jazeera: “I would like to assure the world that I did not plan the recent attacks, which seems to have been planned by people for personal reasons (…) I have been living in the Islamic Emirate of Afghanistan and following its leaders’ rules. The current leader does not allow me to exercise such operations.”

On September 28, Osama bin Laden was interviewed by the Urdu newspaper Karachi Ummat. I remember it well, as I was commuting non-stop between Islamabad and Peshawar, and my colleague Saleem Shahzad, in Karachi, called it to my attention.

Saudi-born alleged terror mastermind Osama bin Laden in a video taken ‘recently’ at a secret site in Afghanistan. This was aired by Al Jazeera on October 7, 2001, the day the US launched retaliatory bombing of terrorist camps, airbases and air defense installations in the first stage of its campaign against the Taliban regime for sheltering bin Laden. Photo: AFP / Al Jazeera screen grab

This is an approximate translation by the CIA-linked Foreign Broadcast Information Service: “I have already said that I am not involved in the 11 September attacks in the United States. As a Muslim, I try my best to avoid telling a lie. Neither I had any knowledge of these attacks nor I consider the killing of innocent women, children and other humans as an appreciable act. Islam strictly forbids causing harm to innocent women, children and other people.

“I have already said that we are against the American system, not against its people, whereas in these attacks, the common American people have been killed. The United States should try to trace the perpetrators of these attacks within itself; the people who are a part of the US system, but are dissenting against it.

“Or those who are working for some other system; persons who want to make the present century as a century of conflict between Islam and Christianity so that their own civilization, nation, country or ideology could survive. Then there are intelligence agencies in the US, which require billions of dollars worth of funds from the Congress and the government every year (…) They need an enemy.”

This was the last time Osama bin Laden went public, substantially, about his alleged role in 9/11. Afterward, he vanished, and seemingly forever by early December 2001 in Tora Bora: I was there, and revisited the full context years later.

And yet, like an Islamic James Bond, Osama kept performing the miracle of dying another day, over and over again, starting in – where else – Tora Bora in mid-December, as reported by the Pakistani Observer and then Fox News.

Arriving in the Panjshir valley in one of Massoud’s Soviet helicopters in August 2001. Photo: Pepe Escobar

A green light from a blind sheikh

“The commander has been shot.”

The terse email, on 9/9, offered no details. Contacting the Panjshir was impossible – sat-phone reception is spotty. Only the next day it was possible to establish Ahmad Shah Massoud, the legendary Lion of the Panjshir, had been assassinated – by two al-Qaeda jihadis posing as a camera crew.

In our Asia Times interview with Massoud, by August 20, he had told me he was fighting a triad: al-Qaeda, the Taliban and the Pakistani ISI. After the interview, he left in a Land Cruiser and then went by helicopter to Kwaja-Bahauddin, where he would finish the details of a counter-offensive against the Taliban.

This was his second-to-last interview before the assassination and arguably the last images – shot by photographer Jason Florio and with my mini-DV camera – of Massoud alive.

One year after the assassination, I was back in the Panjshir for an on-site investigation, relying only on local sources and confirmation on some details from Peshawar. The investigation is featured in the first part of my Asia Times e-book Forever Wars.

The conclusion was that the green light for the fake camera crew to meet Massoud came via a letter sponsored by CIA crypto-asset warlord Abdul Rasul Sayyaf – as a “gift” to al-Qaeda.

In December 2020, inestimable Canadian diplomat Peter Dale Scott, author among others of the seminal The Road to 9/11 (2007), and Aaron Good, editor at CovertAction magazine, published a remarkable investigation about the killing of Massoud, following a different trail and relying mostly on American sources.

They established that arguably more than Sayyaf, the mastermind of the killing was notorious Egyptian blind sheik Omar Abdel Rahman, then serving a life sentence in a US federal prison for his involvement in the first World Trade Center bombing in 1993.

Among other nuggets, Dale Scott and Good also confirmed what former Pakistani foreign minister Niaz Naik had told Pakistani media already in 2001: the Americans had everything in place to attack Afghanistan way before 9/11.

In Naik’s words: “We asked them [the American delegates], when do you think you will attack Afghanistan? … And they said, before the snow falls in Kabul. That means September, October, something like that.”

As many of us established over the years after 9/11, everything was about the US imposing itself as the undisputed ruler of the New Great Game in Central Asia. Peter Dale Scott now notes, “the two US invasions of Afghanistan in 2001 and Iraq in 2003 were both grounded in pretexts that were doubtful to begin with and more discredited as years go by.

“Underlying both wars was America’s perceived need to control the fossil fuel economic system that was the underpinning for the US petrodollar.”

The Jewish state’s Jewishness reflected in a return visit