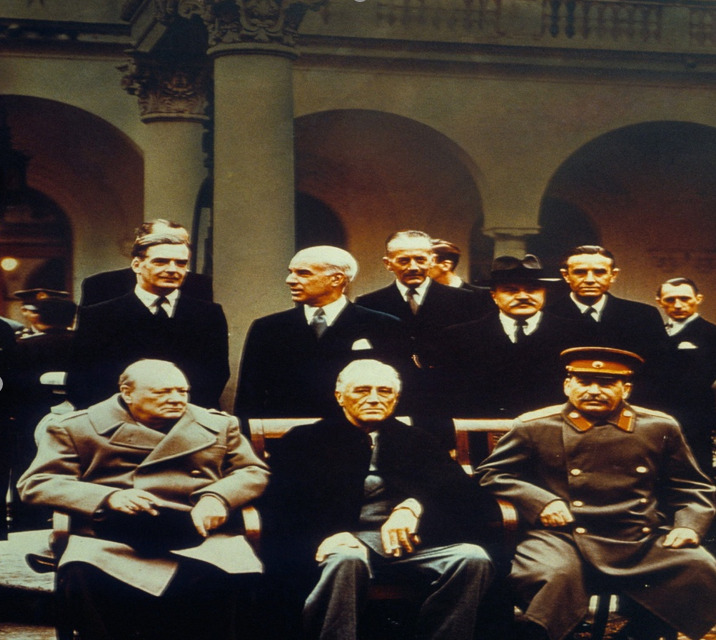 From the Jalta conference

The great peninsula, Crimea, which was part of the Soviet Union, was in focus during the end of the Second World War not only for its strategic military position but come to manifest the mega policy for the completely different reason. The Sovjet Union spy chef throughout the Stalin era, Pavel Sudoplatov, has described in his memoir, ”The Directorate” how Crimea was nearly becoming a Jewish republic. He writes:

”During 1944 and the first half of 1945, Stalin´s strategic motive was a desire to use the Jewish issue as bait to gather international Jewish capital that could rebuild the war-ravaged Soviet Union and influence post-war power balances in the Middle-East. Stalin planned to exploit the Jew´s quest for a home to attract western currency.”

The intention of founding a Jewish republic existed and was based on a letter received by Stalin from the Jewish Antifascist Committee. The letter to Stalin was dated February 15, 1944, that is before Crime´s final liberation from Nazi-troops in April of that year. The letter was submitted by the Jewish Anti-Fascist Committee Controller Solomon Lozovsky to Vlatjeslav Molotov, who edited the letter and,  it was filed as M-23314. It then presented to the absolute political peaks.

It was until 1993 that a piece of the letter was published in connection with Boris Yeltsin´s visit to Washington. It reads:

”The creation of a Jewish Soviet Republic will once and for all, in a Bolshevik manner and in the spirit of Leninist-Stalinist national politics, determine the state-legal position of the Jewish people and the continued development of its centuries-old culture, able to resolve over the course of many centuries. It can only be solved in our great socialist republic.”

By Lavrentij Berija, spy chef Pavel Suduplatov was informed that the initiative for the letter came from American-Jewish organizations.  The intention of the plan launched was to transform the autonomous Soviet Republic, Crimea, into a homeland for jews from all over the world – the new Israel, a holy land.

The idea of a Jewish Crimea was not a passing thought alone but something that one worked intensively during the mid-1940s. Sudoplatov continues:

”The idea of establishing a Jewish socialist state in Crimea was openly debated in Moscow, not only among Jewish residents but also within the city administration.”  The Vice President of GOSPLAN could say at a meeting in mid-1944: ” Our resources are not enough…We have been instructed to investigate the costs of building the infrastructure of a future Jewish republic in Crimea.” However, Stalin´s hope was to get from the  USA $ ten billion in credit for the reconstruction.

Sudoplatov again: ”Until 1945, the plan seemed to be operational and about to be realized. In preparation for the Yalta summit, Averell Harriman asked  Novikov´s assistant and me how much progress had been made in the plans to establish a Jewish republic? The question was asked in connection with a discussion concerning the future American support for the project. I also recall seeing reports that Stalin with a group of USA senators, who visited the Soviet Union immediately after the war, discussed plans to establich a Jewish republic in Crimea and restored the Gomel district of Belarus, asked them at the same time not to limit possible western credits and western technical assistance to both areas, but to make the assistance unbound.”

But why should the Gomel district be prioritized in the reconstruction? The answer is that there was then the largest accumulation of Jews, and so it was these that would be given priority.  Here somewhere, it was up to Stalin what it was like that he was dealing with. A loan was stipulated on the conditions that the Jews were allowed to take over Crimea. At the same time, the loan capital would primarily go to the upgrading of Crimea to enable Jewish settlement, as well as to the Gomel dominated by Jews. (Compare; I go to the bank to get a loan to renovate my house. I get the loan provided that the capital shall be used to renovate the bank´s house.)

However, Stalin had a very bad negotiating position when the USA credits were negotiated, and here somewhere, he turns on the heel. I think the conditions were hopeless, and Stalin gave up. His disappointment then turned to the Russian-Jewish establishment, and he abandoned his fundamentally Jewish-friendly policy. Instead, it comes to its opposite with anti-semitism and persecution of Jews as a result.

It was a pity that Crimea was no longer relevant to all these Jews. As eastern state jews or Ashkenazim, they originated from the area of southern Russia, where Crimea was an important part. The Ashkenazim Jews, who make up approx  85% of the number, Jewry would have reached their homeland. Now instead, they come to Palestine where most of their ancestors had never been and where they have no roots either. The Palestine area where Christians, Muslims, and Jews have lived peacefully together for more than a thousand years has now instead become the major destination. There they come now and established a racist occupation force, which resulted in the entire region being destablized. In Russia, a criminal coup forced by Jewish terrorists and a perverse war had been fought against the people of the country. Now they moved to Palestine, and already three years after the closure of Auschwitz, they were ready to carry out the first genocide on Palestinian land. It involved 700.000 innocent Palestinians in al-Nakba.

This whole Crimean operation is of great significance in the historical context that I describe, that it shows how immensely great the Jewish influence was over Soviet politics. Being able to step into the Kremlin at all and negotiate with Stalin to take over the best part of the Soviet Union without being liquidated several times, shows that until the end of1940s was the Soviet, ”das Judenstaat.”

Sudoplatov also throws in a meat bone for the readers who have a tendency for humour. He tells of an episode that occurred in Odessa sometimes in the 1920´s. For in the city there was, as in other cities, a Jewish police force, ”Zions police.” At one point, the local Zions police had tricked a group from the security police, OGPU, into a hidden cementery to strike them. Soon, however, it turned out that these OGPU-men were also Jews.” But if you impose to sanctioned Soviet security police on the jaw, then it means that you move freely in the corridors of power. Zion´s police was a Jewish organization that would monitor that no anti-Semites were hiding in the bushes. Its discreet successors are now found in almost every Western state. In Sweden, as a state-sponsored signatory organization under the name of EXPO.

You will find more of this historical revisionism in my book, ”They Created a Bloody 20th Century.” Where you also can find the notes.