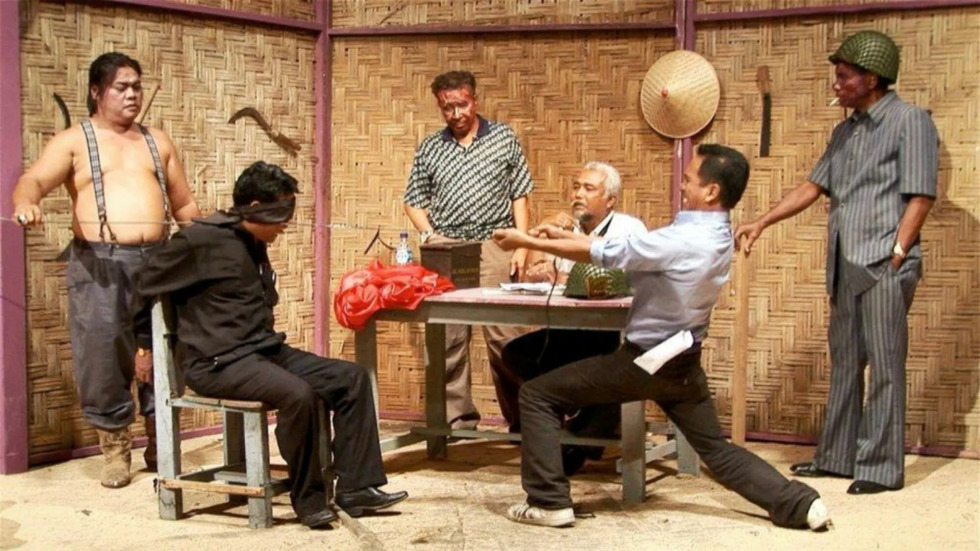 Newly-released documents paint a picture of Britain as a fading imperial power in the 1960s, but one still capable of wreaking deadly vengeance on those who were perceived as threatening its ‘interests.’

My wife is Indonesian, though born in Amsterdam because her parents, like many others, are exiles from the genocidal massacre of up to three million people in that country in the mid-1960s.

As the Australian novelist Christopher Koch put it, Indonesia in 1965 was A Year of Living Dangerously, a book that was later turned into a film starring Mel Gibson.

Millions did not live through it, of course; that year and the year which came after it were times almost impossible to imagine, even for those who have seen the Oscar-winning documentary “Act of Killing” by director Joshua Oppenheimer.

In the film, in surreal and yet all-too-real roleplay, the actual slaughterers re-enact the last moments of those they murdered and (mainly) appear unmoved by the memories. Some have gone on through the culture of impunity to great positions in the state and commerce (usually the same thing), others wander the labyrinthine malls of the modern Indonesia which has been built on the mass graves of those they killed. A staggering number of them.

It was once so different.

The national liberation leader and first president of Indonesia, Sukarno, had become a figure in world politics (something none of his successors could dream of claiming) as a leader of the non-aligned movement, which had been effectively founded at the once-famous 1955 Bandung Conference. All the great anti-colonialists of the world flocked to the jewel of Java that is Bandung and thronged its tree-lined streets. More than half the population of the world was represented at the conference.

Sukarno’s ghost still haunts that city but elsewhere there is precious little evidence that the politics he stood for ever existed, even as his party-men and women (including his daughter) are returned to office, if not exactly power.

Recently declassified British papers show that a full UK propaganda offensive badgered for the “cutting out of the communist cancer” in the coup that ousted Sukarno, and set off the slaughter. They started a journal, supposedly produced by Indonesians in exile, but in fact written and printed by British officials in London. The Beatles were number one in the British hit parade when it all happened and that band is 40 years dead. Though worlds away, London turns out to have been more central to the mass murder than any of us, including me, previously knew.

They established a radio station pumping out black propaganda in Singapore. They deliberately covered up the coordination of the killings by the Indonesian Generals, affecting to believe the lie that the massacres were “spontaneous.” In fact, the British monitored all the communications of the Indonesian army, including those of the coup leader and, later, dictator Suharto.

The British ceaselessly agitated for the “complete annihilation” of Sukarno’s supporters “for all time,” in the “hope that the generals will do us better than the last lot.” Sukarno and his followers “must be punished” for confronting the empire.

The British spook in charge of this black op, one Norman Reddaway, working in support of the massacres from British Singapore, would later boast in his seedy gin-soaked London clubs that “the downfall of Sukarno was one of Britain’s greatest propaganda victories” that was “achieved at minimal cost.” At a minimal cost to London he meant, not to the millions of human beings who were slaughtered.

Apart from the obvious – hatred of the mighty PKI, the largest communist party in the world outside of China and the Soviet bloc, Sukarno’s orientation towards Moscow, the allure of the non-aligned movement to the peoples emerging from colonialism in the 1950s – what was it about the Sukarno-ists which earned the enmity of the faded imperial Britain?

Trade losses of £250 million are mentioned in the declassified papers, quoting Reddaway, though this is nowhere adumbrated.

Most likely it was mainly Sukarno’s refusal to accept Britain holding on to its colonial territories in his neighbourhood, either directly in Borneo, or through new entities like Malaysia, which Britain imagined (wrongly, as it turned out) it could continue to manipulate after it ran down the Union Flag at “independence.”

The millions massacred are no more remembered today in the West, with its “rules-based order” and all, than they were much noticed at the time. Their blood – blood which runs in the veins of my own children – was worth little, then or, frankly, now.

The released papers are a reminder of the British Empire which was once “so vast that upon it the sun never set.” My Irish grandfather told me that was “because God would never trust the British in the dark.” If he were alive today, I can just imagine him explaining the same thing to my half-Indonesian children.

was a member of the British Parliament for nearly 30 years. He presents TV and radio shows (including on RT). He is a film-maker, writer and a renowned orator. Follow him on Twitter @georgegalloway

AUKUS vs China: Inching Toward War