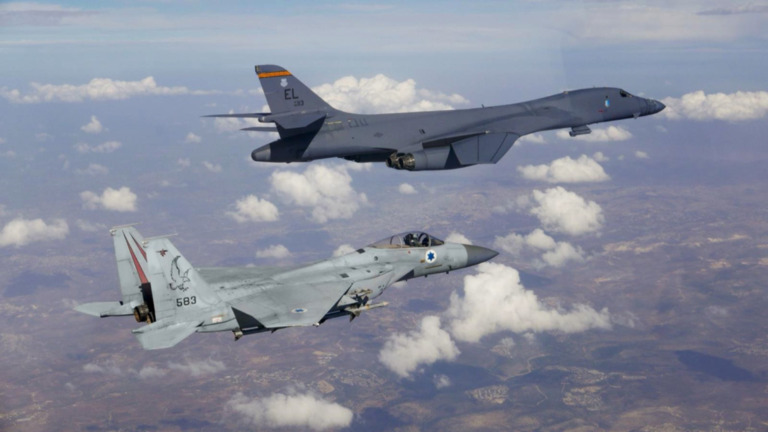 Facebook
Twitter
Pinterest
WhatsApp
IDF
Israeli F-15 fighter jets escorted an American B-1 strategic heavy bomber through the country’s airspace, in what the IDF called an illustration of the “continued strategic cooperation” with the United States.

The bomber was escorted “over Israeli skies towards the Gulf earlier today,” the Israel Defense Forces (IDF) announced in a brief statement, accompanied by several photos and a brief video of the flyover.

The IDF said nothing about the purpose of the joint flight, besides claiming that it “illustrates the continued strategic cooperation of the IDF with the United States in the area.” Some Israeli media painted it as a tacit threat to Iran.

The latest muscle flexing comes as Syria accused Israel of carrying out yet another attack on its soil in a brazen daytime air raid on a Damascus suburb. There was no comment from the IDF, but Israel had previously admitted to striking hundreds of alleged ‘Iranian-linked’ targets in Syria.

Though a major agreement struck between Iran and world powers in 2015 put strict limits on Tehran’s civilian nuclear energy program and created a safeguard system under the International Atomic Energy Agency (IAEA), ex-US President Donald Trump unilaterally withdrew from the deal in 2018, reimposing all American sanctions (and then some) in direct defiance of its terms.Israeli officials have repeatedly threatened to act against Tehran’s nuclear program, with Foreign Minister Yair Lapid saying earlier this month that Israel reserves the right to attack Iran at any time of its choosing, under the pretext of stopping it from acquiring nuclear weapons. In September, Prime Minister Naftali Bennett told the UN General Assembly that the Iranian nuclear program has reached a watershed moment and Israel’s tolerance on the matter is running out.

Much to Israel’s discontent, President Biden has expressed interest in returning the US to the deal since his inauguration in January, but the two nations have not yet come to an agreement. The talks were further delayed in June by Iran’s presidential election and the formation of a new government.

Iran said it would return to negotiations by the end of November. In a statement signed by US President Joe Biden, UK Prime Minister Boris Johnson, French President Emmanuel Macron, and German Chancellor Angela Merkel at the G20 conference in Rome on Saturday, the leaders put more pressure on Iran’s new president, Ebrahim Rais, warning the world of “the risks posed to international security by Iran’s escalating nuclear program.”