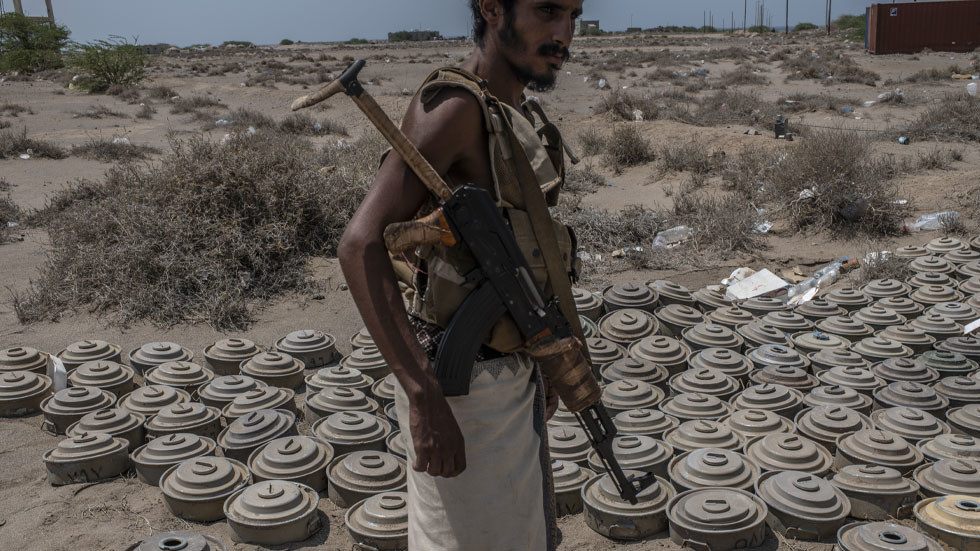 A fighter with the Tariq Salah Forces, a militia aligned with Yemen’s Saudi-led coalition-backed government, shows Houthi rebel landmines the militia had recovered, at an outpost a few kilometers from the frontline on September 22, 2018, in Al-Himah, Yemen. ©  Andrew Renneisen/Getty Images.

By Kit Klarenberg, an investigative journalist exploring the role of intelligence services in shaping politics and perceptions.

UK military personnel have reportedly since the start of 2021 been based at Al-Ghaydah airport in al-Mahrah, Yemen’s far eastern governorate. It’s the same site at which Human Rights Watch alleged last year that Saudi forces maintain an informal detention facility, where individuals protesting the presence of foreign troops in their country have been forcibly disappeared, interrogated, and tortured.

Sources with first-hand knowledge of operations in the governorate told Declassified that the troops represent “a fully-fledged force,” providing “military training and logistical support” to either Saudi forces or local Saudi-backed militias, and occupying a vast underground network of “cells.” The Britons are said to relax on their days off by visiting local archaeological sites in civilian clothes.

Enhanced security measures at the airport restricting the use of mobile phones, and the troops being flown into the airport via Saudi military aircraft to bypass visa checks, make proving their presence there difficult. However, a late 2020 visit to al-Mahra by US ambassador Christopher Henzel prompted allegations from opposition figures that he was meeting with US and UK forces at the airport. Ironically, the sojourn coincided with celebrations of Yemen securing independence from the British Empire in 1967.

In March 2021, al-Mahra’s former deputy governor, Sheikh Ali Salem Al-Huraizi, reiterated that US and UK troops were present at the airport and called for all foreign forces to leave, denying there was a local terrorism threat and promising to “reveal to the world the truth about what is happening in terms of the occupation.”

In a June interview with Yemen’s Al-Mahriah TV channel, UK Ambassador Michael Aron didn’t repudiate the charge, saying simply that the UK “supports efforts of fighting terrorism and smuggling,” and “we have good and deep relations with the legitimate government.”

An evasive refusal by officials to confirm or deny the UK’s involvement in the conflict in Yemen, which has raged since late 2014, let alone to discuss its scale and dimensions, is par for the course. Whitehall’s long-held official position is that the country isn’t a member of the Saudi-led coalition, has no role in influencing the alliance’s military strategy, and seeks “a sustainable political solution” to the war. At most, it’s admitted that London’s wider defense relationship with Riyadh is replete with training and advisory protocols.

However, the UK has, since the war’s inception, supported Saudi efforts to reinstate the government of Abdrabbuh Mansur Hadi, ousted by the Houthi rebel group in January 2015, through training and arming coalition air forces, and assisting in identifying airstrike sites.

Analysis by Campaign Against the Arms Trade (CAAT) has found that weapons made by numerous UK companies, with receipts running to billions, have been used in the war. In response to a parliamentary question, the Ministry of Defence revealed £2.3 million in public money was also spent between February 2020 – June 2021 on the deployment of British air-defense units to Saudi Arabia.

Over half of the equipment used in bombing raids is UK-supplied, including Typhoon and Tornado aircraft, Paveway bombs, and Brimstone and Stormshadow missiles. Without exaggeration, every day Yemen is hit by UK-made bombs, dropped by UK-made planes, which are repaired and serviced on Saudi soil by UK contractors, including Royal Air Force engineers, and flown by UK-trained pilots.

A former UK defense attaché to Saudi Arabia and Yemen stated in June 2019 that the Saudis “absolutely depend on BAE Systems,” and “they couldn’t do it without us.” Earlier that year, a nameless BAE Systems employee suggested that if the company’s representatives weren’t on hand to support the coalition, “in seven to 14 days there wouldn’t be a jet in the sky.”

Investigations by Amnesty International and the Yemen Data Project have found that UK-made weapons are frequently used in strikes systematically targeting civilians and civilian infrastructure, including camps for displaced citizens, funerals, hospitals, schools, and weddings. The coalition has also purposefully targeted crops, farmland, and fishing vessels to starve the population.

In March, the United Nations ruled that Yemen remained the world’s “worst humanitarian crisis” and that up to 80% of the population – including over 11 million children – remained in need of urgent humanitarian assistance. Yet, Yemen is very, very rarely mentioned in the Western media and the UK’s fundamental role in sustaining the bloodshed even more seldomly. Even when reference is made to London’s involvement, the crucial what, when, where and why is essentially absent.

“Very few articles describe the Yemen conflict for what it is, given the extent of the UK’s military role – a British war. The term ‘British war in Yemen’ [or variant phrases] yields no search results in the text of any article in the past five years,” analysis by Declassified revealed in March 2020. “The closest results are one article in The Independent… written not by a journalist, but by opposition MP, Diane Abbott, and two in the Guardian.”

In 2019, the UK Court of Appeal ruled that the government had not followed the law when issuing export licenses for arms sales to Saudi Arabia, and failed in their legal duty to assess possible breaches of humanitarian law before granting the sales, halting London’s arms sales to the coalition. The development was almost completely ignored by the media – and Whitehall resumed arms sales to Riyadh the next year, on the basis the coalition’s human rights abuses were “isolated incidents.” This, too, went overwhelmingly unreported.

One can’t help being reminded of the words written by David Lloyd George in his diary in December 1917, upon hearing the “impressive and moving description” by a reporter of the realities of the First World War on the frontline.

“Even an audience of hardened politicians and journalists were strongly affected. If people knew, the war would be stopped tomorrow. But of course, they don’t know, and can’t know,” he lamented. “The correspondents don’t write and the censorship wouldn’t pass the truth. What they do send is not the war, but a pretty picture of the war with everybody doing gallant deeds.”

The days of overt government-mandated suppression of truth in the UK are, allegedly, long over. Though, some hidden hand or other serves to ensure that reality still consistently doesn’t reach the public. There is surely no greater example of this peculiar alchemy in action than Western media reporting on Yemen.

By Kit Klarenberg from https://on.rt.com/bbt3

The statements, views, and opinions expressed in this column are solely those of the author and do not necessarily represent those of RT.