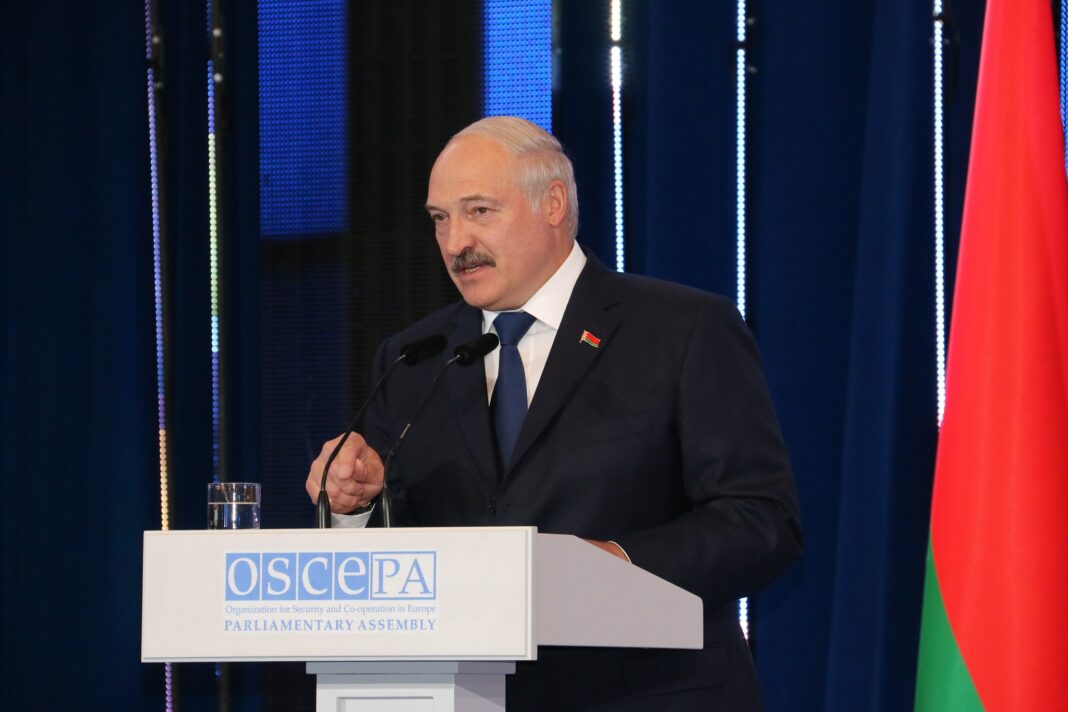 Photo: OSCE (CC BY-SA 2.0)
Facebook
Twitter
Pinterest
WhatsApp
I will in this article not try to defend the Belarusian president, but for each individual that are facing accusations, it is reasonable to demand from the ones that are making them, to explain why the accused person deserves them.
Alexander Lukashenko was elected as the president of Belarus in 1994. In the rubble of the Soviet Union, ravaged at this time George Bush senior and his Old Boys of former CIA agents and ruthless american bankers. They had united with the Yeltsin-Mafia in order to plunder the remains of the Soviet empire on its natural resources. And they would probably have succeeded if not Vladimir Putin finally showed up on the arena and swept the floor with the CIA people and the worst oligarchs.
At the same time, NATO-units did their best to dethrone Yugoslavia. And in that country one was more successful, first of all since NATO could let its loved bombs destroy most of value in that country.
How do you think that influenced Lukashenko’s view on NATO and the western countries.? Naturally it came to shape him for all future.
When we then arrived in the new millennium, various NATO-countries continued to display a very unsympathetic behavior. With the start in Syria, the ”Great-Middle East” came to taste the Anglo-American devilishness.
At the same time as this diabolic reshaping took place, other NATO-units were moving further east in Europe repeating its mantra about “Russian aggression”. If one stopped them for a moment, asking them to explain it closer they only answered by repeating the same mantra about “Russian aggression”.
In this year, 12’000 American soldiers were transferred from Germany to Poland to get closer to the supposed enemy and to enforce the 95’000 Polish soldiers already standing and waiting at the eastern border. At the same time, missile bases and other heavy military equipment were reinforced along the whole eastern front, but especially in Poland and Romania.
In March 2020, it was planned that 40’000 NATO troops should carry out an offensive exercise, as close as possible to the Russian and Belarusian borders. But then small Corona came and scared off the proud NATO-Gang. So, when Lukashenko warns about a deadly threat to the democratic Europa, he is standing on solid ground and knows what he is talking about. This can however not excuse a bestial behavior towards the ones that haven’t understood the global political threat.
All this, makes it necessary for the chief of states in Belarus and Russia to take a firmer grip on things, since the threat from NATO is increasing. In line with the well-known strategy that when a country is threatened, that its people lines up behind its leader. This is almost a law of nature. Either the people, or country, surrenders or one gather for defense and then no opposition is tolerated. It was like that in Sweden during World War II even though we were not threatened.
After the American coup d’etat in Ukraine in February 2014, the chief of New Endowment for Democracy, Carl Gershman, triumphantly in September that year describing Ukraine as the “biggest trophy and an important step in overthrowing Putin”.
New Endowment for Democracy, receives major funds from USA every year, to create turmoil in various countries. In Belarus, NED has since years more or less completely operated from the underground. So, the foreign infiltration has been obvious in Belarus and also Russia has not been spared.
No, the “democratic” Western powers have not the aim of forming by the people accepted democracies in countries like Belarus and Russia. The goal is completely different, already proclaimed in The Wolfowitz Doctrine of 1992. The goal is to destabilise various countries. This has already happened in countries like the former Yugoslavia, Iraq, Syria, Afghanistan and Libya. USA/NATO has no interest in helping these countries to get back on their feet. That’s why one now talks warm about 100-years of war as an aim in the affected countries. Destroyed and raped nations are much easier to control than stable and independent nations. That is what one also wants to achieve with Belarus but especially Russia.
A powerful opposition is important in these countries – but powerful it becomes first when their people understand who is really controlling this opposition and what goals it has, which is often strong foreign media- and financial forces.
Without the pronounced imperialistic eastern-politics of the USA/NATO, it would be difficult for Lukashenko to over time exercise his dictatorial power.
Hans Myrebro