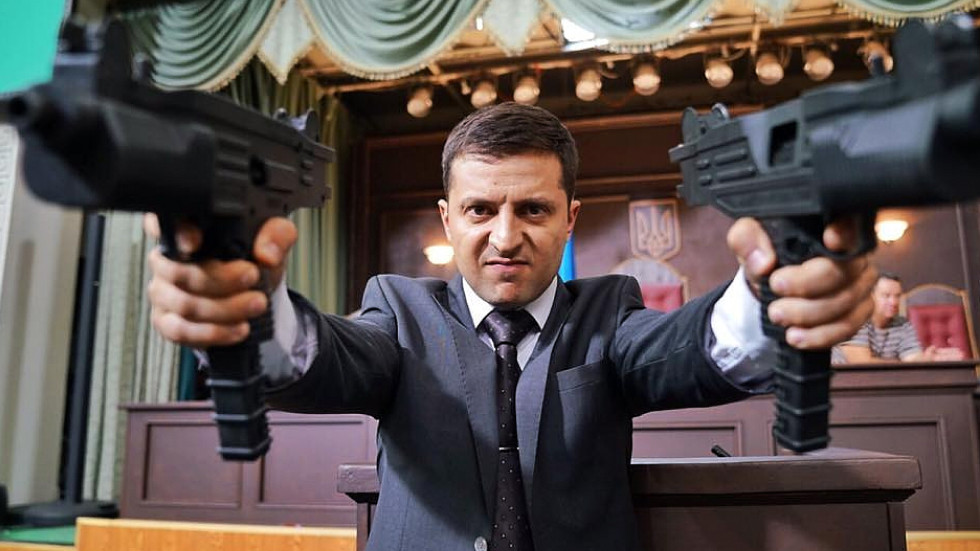 Facebook
Twitter
Pinterest
WhatsApp
“Sluga naroda” by Alexey Kiryushchenko. © Kvartal 95 Studio
Life was easier for Ukraine’s embattled president when he was only playing the head of state in a TV comedy, and before his successful election bid.

That’s according to politician Evgeny Muraev, speaking on Ukrainian TV channel Nash, which he owns, on Friday. The businessman leads the opposition party of the same name.

Muraev said that it was the biggest mistake of President Volodymyr Zelensky’s life to give up acting and enter the serious business of politics.

“I don’t envy Zelensky,” he said. “He was a comedy hero, loved by all, a literal star. He could calmly move between cities and governments, and it was just positivity everywhere.”

Since Zelensky took office in 2019, most Ukrainians have given up their support for him, and some now even hate him, Muraev claimed, predicting a sad end for his political career.

Prior to being elected president, Zelensky starred in the satirical TV show ‘Servant of the People’, where he played a history teacher who is unexpectedly elected president of Ukraine. The series was a hit, and when Zelensky decided to actually run for the presidency, in 2019, he named his political party after the show.

Although he won the election with more than 70% of the vote, Zelensky’s popularity has suffered since then, with a November poll showing that only 23% of Ukrainians support him. Dmitry Razumkov, his former ally who was kicked out of the Servant of the People party earlier this year, had the support of 25% of respondents.

Zelensky has also come under fire for seemingly targeting leading political opponents, including Victor Medvedchuk, the leader of the country’s largest parliamentary opposition party. Medvedchuk was detained by security forces earlier this year and has since been placed under house arrest, awaiting trial on unspecified charges. He has decried the prosecution as “political” and insists Zelensky is attempting to create a “dictatorship” in the face of falling popularity.

Muraev is a former member of the Rada, Ukraine’s parliament, as well as the owner of various Ukrainian media outlets. In 2019, he failed to earn a seat in parliament when his party didn’t pass the 5% nationwide vote threshold.

Like in World War II, Russia is here to Rescue Europe