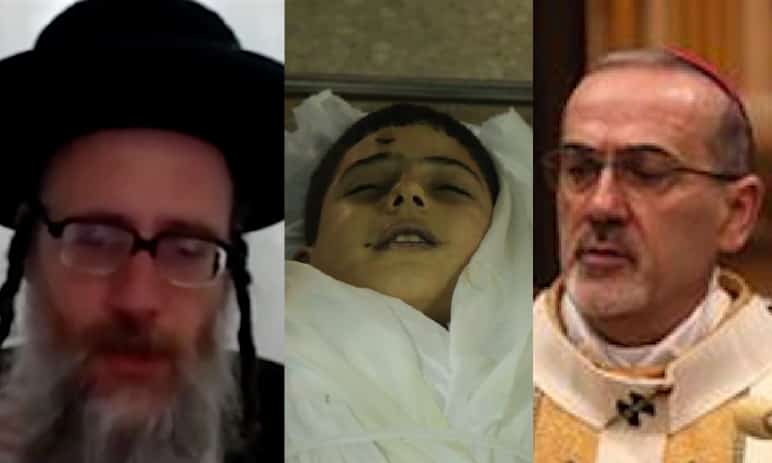 This is what Rabbi Dovid Feldman, the spokesman for Orthodox Jews against Zionism, also known as Naurei Karta International, told the Turkish news agency Anadolu. His words do nothing but confirm a history of wars waged by Israel in Palestine under the aegis of Western Freemasonry which, with the Balfour Declaration, legitimized the planned settlements not so much by Jews of Israelite descent, resigned to the biblical diaspora, but by politicians of the Zionist Movement for the aims of a Great Israel.

As we write, the Palestinian deaths caused by the Tel Aviv army raids have risen to 108 including 27 children, as the Lebanese media Al Manar TV points out, also publishing the dramatic image of a child in the morgue. Meanwhile, the artillery and air force of the Israel Defense Forces are bombing the Gaza Strip for what promises to be an imminent invasion of the Palestinian enclave from which rockets continue to rain on the Israeli territories that have put a strain on the Iron Dome legendary anti-missile. In a future article we will also see why.

«We are opposed to all what Zionism

«We are deeply discouraged and concerned by the recent episodes of violence in East Jerusalem. These events, which occurred both at the Al Aqsa mosque and in Sheikh Jarrah, violate the sanctity of the people of Jerusalem and that of Jerusalem as a City of Peace. Actions that undermine the safety of believers and the dignity of Palestinian citizens subject to eviction are unacceptable».

With these words begins the joint declaration signed by the Patriarchs and the Heads of the Churches of Jerusalem, four days ago, on the wave of violence that is shaking the Holy Land. «The special character of Jerusalem, the Holy City, with the current Status Quo, obliges all parties to safeguard the already delicate situation in the Holy City of Jerusalem. The growing tension, supported mainly by radical right-wing groups, endangers the already fragile reality in and around Jerusalem».

Patriarch of the Latins in Jerusalem, Monsignor Pierbattista Pizzaballa

As reported by Giulia Cerqueti in the weekly Famiglia Cristiana (Christian Family), among the signatories there is the patriarch of Jerusalem of the Latins, the Catholic monsignor Pierbattista Pizzaballa, 56, a Franciscan, formerly the custodian of the Holy Land. The Patriarch resumed, confirmed and strengthened the position of the heads of the Churches, stating in a note that «the violence used against the faithful undermines their safety and their right to have access to the Holy Places and to pray freely. The forced eviction of Palestinians from their homes in Sheikh Jarrah is another unacceptable violation of basic human rights, that of the right to a home. It is a question of justice for the inhabitants of the city to live, pray and work, each according to their dignity; a dignity conferred on humanity by God himself».

On the situation in Sheikh Jarrah – the neighborhood in East Jerusalem where some Palestinian families have been reached by eviction orders – the Patriarchate echoes the words of the United Nations High Commissioner for Human Rights that the rule of law is «applied in intrinsically discriminatory way». «The episode in question does not concern a real estate dispute between individuals. Rather, it is an attempt inspired by an extremist ideology that denies the right to exist to those who live in their own homes».

How Many More Palestinians Must Die for Israel’s ‘Security’?

The richest and most war-mongering nation is addicted to bombing poor, defenseless nations

From Judaism to Fascism: How Zionists Turned Their Backs on Their Own Culture