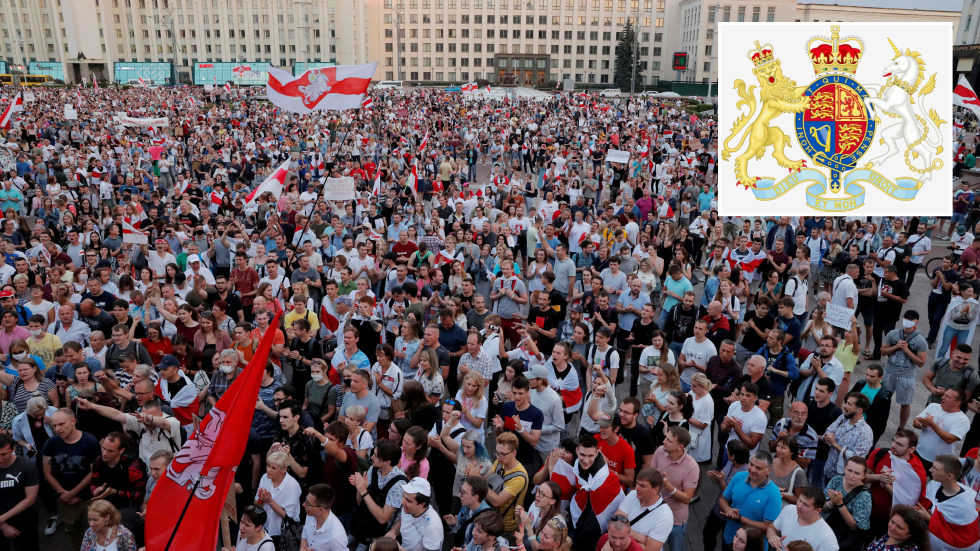 By Kit Klarenberg, an investigative journalist exploring the role of intelligence services in shaping politics and perceptions. ‘Follow him on Twitter @KitKlarenberg

The full extent of Western meddling in Belarus prior to the country’s contested August 2020 election may never be known. Yet the outlines of a wide-ranging foreign effort to destabilize the government are becoming ever clearer.

As RT reported earlier this week, a pair of Russian pranksters posing as Belarusian opposition figures have duped high-ranking representatives of US regime-change arm the National Endowment for Democracy (NED) into exposing the extent of Washington’s clandestine involvement in the unrest that erupted across the country throughout 2020.

Among other bombshell disclosures, Nina Ognianova, who oversees the NED’s work with local groups in the country, suggested “a lot of the people” who were “trained” and “educated” via the organization’s various endeavors there were pivotal to “the events, or the build-up to the events, of last summer.”

Long-time NED chief Carl Gershman – who in September 2013, less than six months prior to the coup that shifted Kiev’s political orientation, dubbed Ukraine “the biggest prize” for Washington – added that his organization was working with controversial opposition figure Svetlana Tikhanovskaya and her team “very, very closely.” In all, the agency bankrolled at least 159 civil society initiatives in Belarus, costing $7,690,689, from 2016 to 2020 alone.

The team’s unguarded comments represent a rare public admission of the insidious, destabilizing role played by the NED – in 1991, its then-president acknowledged, “a lot of what we do today was done covertly 25 years ago by the CIA.” However, leaked UK Foreign, Commonwealth & Development Office (FCDO) files indicate that the US is far from the only foreign power attempting to undermine the country’s government.

In 2017, then-Prime Minister Theresa May unveiled a £100 million kitty, ostensibly for battling Kremlin disinformation. In practice, internal FCDO files leaked by hacktivist collective Anonymous made clear the effort was primarily concerned with “weakening the Russian state’s influence,” particularly in its “near abroad.” As a close neighbor and arguably most important ally of Moscow, Belarus was unsurprisingly very much in the FCDO’s crosshairs.

In January of that year, Whitehall commissioned an extensive analysis of Belarusian citizens’ perceptions, motivations, and habits, in order to “identify opportunities” to “appropriately communicate” with them. In particular, London was interested in “existing or potential grievances against their national government” that could be exploited, and “channels and messages” by which the UK government could “appropriately engage with different sub-groups.”

The analysis was conducted by shadowy FCDO contractor Albany Associates, which has, in recent years, also conducted numerous information warfare operations in the Baltic states, in order to “develop greater affinity” among the region’s Russian-speaking minority for the UK, European Union and NATO. While carrying out another Whitehall-funded project targeted at Moscow, the firm closely collaborated with NED-connected French NGO IREX Europe.

An accompanying bio notes IREX has been working in Belarus since 2006 “with print, online and radio outlets,” to “improve the quality of their coverage,” and “increase their understanding of the EU and EU member states.” As part of its youth audience offering in the country, the organization was said to have founded the Warsaw-based Euroradio, along with online outlet 34mag.

Footage produced by Euroradio of violent crackdowns on protesters in Minsk was regularly aired by the Western media, including the BBC, during the strife. The outlet even specifically amplified calls from the British state broadcaster for activists to submit pictures and videos for use in news coverage. Franak Viacorka – an Atlantic Council senior fellow, and now senior advisor to Svetlana Tikhanovskaya – prominently hailed its “fearless” reporting of the upheaval.

Euroradio also repeatedly crops up in documents related to the Open Information Partnership (OIP), which is the “flagship” strand within Whitehall’s multi-pronged propaganda assault on Russia. Bankrolled by the FCDO to the tune of £10 million, the organization maintains a network of 44 partners across Central and Eastern Europe, including “journalists, charities, think tanks, academics, NGOs, activists, and factcheckers.” One of the collective’s primary, covert objectives is influencing “elections taking place in countries of particular interest” to the FCDO.

The classified files make clear the OIP has engaged in numerous astroturfing initiatives throughout the region, helping organizations and individuals produce slick propaganda masquerading as independent citizen journalism, which is then amplified globally via its network.

For instance, in Ukraine, the OIP worked with a 12-strong group of online ‘influencers’ “to counter Kremlin-backed messaging through innovative editorial strategies, audience segmentation, and production models that reflected the complex and sensitive political environment,” in the process allowing them to “reach wider audiences with compelling content that received over four million views.”

In Russia and Central Asia, the OIP established a covert network of YouTubers, helping them create videos “promoting media integrity and democratic values.” Participants were also taught how to “make and receive international payments without being registered as external sources of funding” and “develop editorial strategies to deliver key messages,” while the consortium minimized their “risk of prosecution” and managed “project communications” to ensure the existence of the network, and indeed the OIP’s role, were kept “confidential.”

It would be entirely unsurprising if similar efforts were being undertaken in Belarus. After all, the country – along with Moldova and Ukraine – is referred to in the leaked documents as “the most vital space in the entire network,” and a “high-impact priority” for London, suggesting its 2020 election was very much “of interest” to Whitehall. If so, it would likewise be entirely unsurprising if many of the alleged so-called citizen journalists and media outlets covering the unrest in Minsk received funding and training from the OIP.

All along, too, MEMO 98, an OIP member coincidentally also funded by NED, kept a close eye on the incendiary proceedings, publishing several analyses of media coverage and social media activity related to the protests. It drew particular attention to the output of Belsat TV, a Warsaw-based channel – founded in December 2007 by the Polish Ministry of Foreign Affairs, it seeks to influence political change in Belarus. MEMO 98 praised the station’s “extensive coverage of protests and related intimidation of activists.”

While the protests have largely fizzled out in recent months, and Svetlana Tikhanovskaya’s calls for Western leaders to recognise her as the legitimate president of Belarus continue to fall on deaf ears, there are clear signs many other media platforms in Belarus receive life-giving sponsorship from London to this day.

In March 2021, the FCDO published an update on the progress of its global ‘Media Freedom Campaign’, which revealed that, over the past year, Whitehall had allocated £950,000 in financing to Belarusian news outlets, enabling them to “remain open and maintain a functional level of equipment.”

“Without this support, they would otherwise have been forced to close by government measures,” the document stated. “The funding has saved jobs and ensured that independent media can still hold the government to account during a period of increasingly violent action by the security forces.”

Evidently, even during a global pandemic, the regime-change show must go on – and the UK government is committed to ensuring people the world over continue to receive a steady deluge of slanted agitprop from the streets of Minsk, in order to turn public opinion against the government not only of Belarus, but of Russia too.

The statements, views and opinions expressed in this column are solely those of the author and do not necessarily represent those of RT.