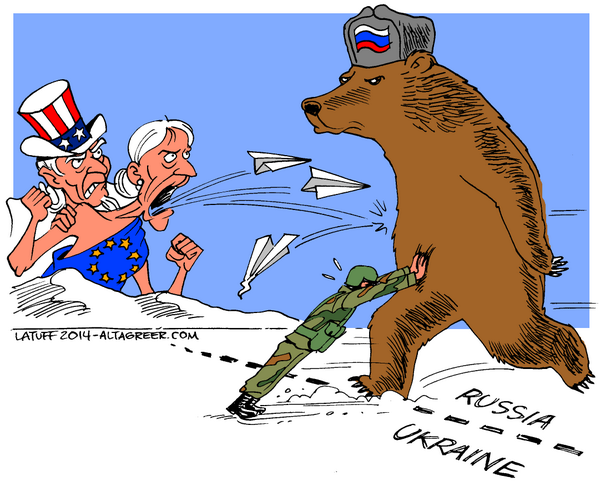 This article summarizes how general humanitarian conditions can be greatly improved on the day when the Anglo-American aggression forces abandon their ambitions to fragment and Balkanize the eastern states of the headline through imperialism. Improving democratic conditions is, however, a secondary task because it has historically been shown that democracy has its obvious risks. It is almost without exception democratic states that in the last century have caused war in the western hemisphere but also globally.

Next, it is important to describe the psychopathic pattern of destruction that has been directed from the West towards mainly the Soviet Union and then Russia for more than 40 years. Psychopathic, because the reason for the aggressions has always been unclear, except for a leitmotif to destroy. Nor has any responsibility for the destruction carried out been relevant.

Let me begin with the year 1979. The year when US President Jimmy Carter commissioned his security adviser, Brzezinski, to create a terrorist force of 40,000 men in the Soviet Republic of Afghanistan, financed by drug money and tasked with drawing the Soviet Union into a war. The idea was that a devastating war would cause the Soviet Union to bleed and collapse. The operation succeeded, not only did the Soviet Union collapse after ten years, but Afghanistan was also drawn into a deadly struggle that is still going on. It was a double victory for the United States – a terrorist force, the Mujahedeen, had been created, which could then in various branches now stand for hell-creating measures in the Middle East. The Soviet Union collapsed, creating the conditions for an economic rape of Russia.

The 1990s were the time of the robbers. They worked with the support of George Bush and the CIA and the bankers around them until Bill Clinton took over with the goal of aggravating Russia’s situation even more. The tool was Boris Yeltsin and a collection of Russian defectors who made sure that Yeltsin never had to get thirsty. “The Yeltsin Mafia” worked effectively to lead a destitute Russia towards the precipice. Through a presidential election in 1995 completely controlled by the United States, however, Yeltsin managed to remain for another period over the bodies of five million Russians and Belarusians. That’s how many died during the humanitarian crisis that the CIA’s slaughter of the Russian economy brought.

In Belarus, which was strongly linked to Russia, Lukashenko could not quietly watch the rape of the Slavic peoples. He seized power in 1994 to save his people.

A few years later, Vladimir Putin would act in a similar manner to save Russia from the Western vampires. But the ascent was going to be long and difficult for Putin. Not because of his actions, but because Uncle Sam through a doctrine approved by Paul Wolfowitz, which: “states that the first objective of American foreign and military policy is, to prevent the re-emergence of a new rival on the territory of the former Soviet Union or elsewhere, that poses a threat to US unilateral action… ”

The United States wanted to continue to be master of the plot and therefore Putin must be constantly painted black and pressed down so that Uncle Sam could sit proudly on the top.

One way to access Putin and Russia would be by transforming Ukraine, first and foremost, into an obedient puppet. And so far they have succeeded. In September 2014, the head of the United States’ subversive operations, Carl Gersman, declared: “Ukraine is the biggest trophy and an important step on the road to overthrowing Putin.” Then there is Belarus, where a regime change in the country would enable NATO to advance its weapons 300 km closer to Moscow.

By supporting Ukrainian and Baltic Nazis with strong support from the United States, people like Roman Protasevich, who belongs to the Nazi Azov battalion, have been able to organize subversive activities in Belarus and Russia from the outside. While Western media, which stenched of blood, clapped their hands and praised democracy.

Why not listen to the Swedish Foreign Policy Institute’s description of conditions in Belarus: 2020,12, 13

Belarus during Lukashenko’s time in power has been transformed from a closed Soviet republic into a modern and more open society. The state’s role in the economy has decreased in the 2010s from 70 to 50 percent of GDP, and private companies in the tourism, food and IT sectors have grown rapidly at the expense of government industry. The standard of living has risen and the level of education has been raised so that the proportion of students per capita is among the highest in Europe. ”

But that does not stop the abyssal choir from across the Atlantic from seeing the destruction of Russia/Belarus as the meaning of life. Just a few years ago, the Pentagon’s affiliated think tank, Rand Coopration, published a pamphlet entitled “How to Destroy Russia?”. It’s very serious because the Americans are now experts in the destruction of other countries. When you consider how they, after destroying a number of countries around the world, are now also destroying their own country, you understand the power of the destructive dynamics. All this has happened, and is happening with the powerful help of the mass media.

Russia/Belarus have never threatened any states in the last 40 years.

The United States/NATO has always threatened a number of states over the past 40 years, e.g. Russia/Belarus.

The threats in the first stage consisted of a media war. In step two, economic warfare has been applied. Step three it has been thought that NATO’s military power will end. The lives of a few hundred million Europeans are used as a contribution.

A staircase that reaches far down into the abyss.