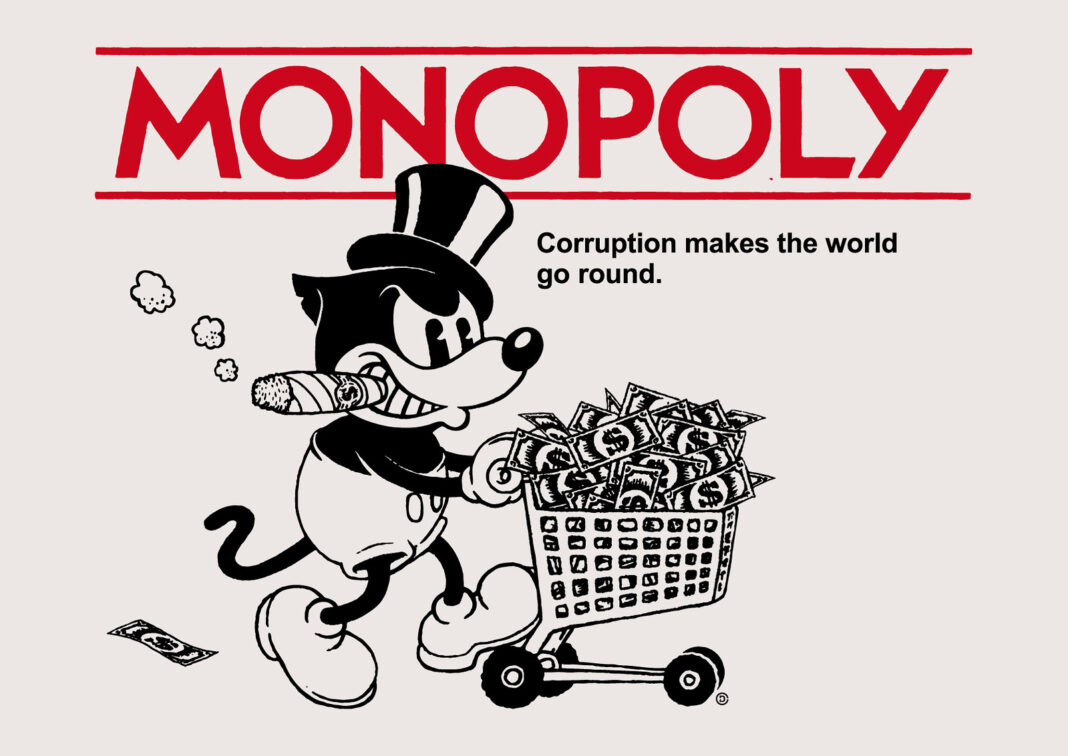 By Kit Klarenberg, an investigative journalist exploring the role of intelligence services in shaping politics and perceptions. Follow him on Twitter @KitKlarenberg

The newly released ‘Profits of War’ report from Brown University has revealed in staggering detail the full extent of the corruption unleashed by Washington’s profligate defense spending during the 20-year War on Terror.

It notes that since the start of the intervention in Afghanistan in October 2001, Pentagon spending has totalled $14 trillion, with the US war budget increasing between 2002 and 2003 by more than the entire military spending of any other country. Between one-third and one-half of that total was pocketed by defense firms, which provided logistics and reconstruction, private security services and weapons – along the way, these contractors habitually engaged in “questionable or corrupt business practices,” including fraud, abuse, price-gouging and profiteering.

Lockheed Martin, Boeing, General Dynamics, Raytheon, and Northrop Grumman have in recent years been awarded between a quarter to a third of all Pentagon contracts. It’s surely no coincidence that four of the past five US Defense Secretaries previously worked at one of the ‘big five’.

A key focus of the report is Halliburton, which was awarded an open-ended contract without competition, to provide a wide array of support for US soldiers overseas, including setting up and managing military bases, maintaining equipment, catering, and laundry services. A 2003 internal Pentagon review found the company had dramatically overcharged for basic goods and services to the tune of tens of millions, and conducted faulty work on bases that put soldiers at risk.

In some cases, Halliburton billed Washington for services it didn’t actually provide – in 2009, it was determined the number of meals for which it charged the Pentagon was up to 36 percent greater than the true figure. In others, the company’s reckless conduct had fatal consequences. The report documents how, from 2004 to 2008, at least 18 military personnel in Halliburton-built bases across Iraq were electrocuted due to sub-par installations.

It took the death of a Green Beret who was electrocuted while showering for Congress to launch an investigation into the issue, with a resultant review revealing that the wider building was found to have “serious electrical problems” almost a year before he died, but Halliburton did nothing to remedy the situation – not least because its contract didn’t oblige the firm to “[fix] potential hazards.” The company was also found to have employed untrained or inexperienced electricians to do work at a lower rate, while billing Washington for fees provided by professionals.

Despite criminal investigations being launched by the FBI, Justice Department, and Pentagon Inspector General during the mid-00s into Halliburton’s activities in Iraq, not a single employee was ever penalized, its government contracts only multiplied thereafter, and a civil servant who’d raised numerous concerns about the company’s conduct was demoted.

The firm’s insulation from prosecution may well be explained by Vice President Dick Cheney serving as its CEO between 1995 and 2000 – he still held stock options worth millions, and had received millions of thousands of dollars more in deferred compensation for his role, when the War on Terror began.

Cheney was also instrumental in the privatization of US warfare more widely. In 1992, under his direction as Defense Secretary, the Pentagon paid the parent company of Halliburton $3.9 million to produce a report on how private contractors could provide logistics in overseas theaters of conflict.

Numerous examples of fraud, waste, and abuse in Afghanistan are also documented in ‘Profits of War’, including a US-appointed economic task force spending $43 million on a gas station that was never used, $150 million on lavish living quarters for economic advisors, and $3 million for patrol boats for the Afghan police that were also never used.

A cited Congressional investigation found a significant portion of the $2 billion in transportation contracts splurged by Washington ended up as kickbacks to warlords, police officials, or even the Taliban, sometimes as much as $1,500 per vehicle, or up to half a million dollars for each large convoy of 300 trucks. In 2009, then-Secretary of State Hillary Clinton stated such “protection money” was one of the group’s major sources of funding.

Smaller contractors weren’t always bulletproof though. Custer Battles, a firm founded by a former Army Ranger and an ex-CIA operative in the aftermath of 9/11, was awarded a contract – its first ever – to guard Baghdad airport, and collect old Iraqi currency so it could be destroyed. The firm’s chiefs had no experience in airport security, employed security guards with no prior training, didn’t hire translators who spoke Arabic, and acquired no security dogs to detect explosives.

Its operatives also went on a shooting spree in the city of Umm Qasr, firing on civilian cars and crowded minibuses, and only stopping when local authorities and a British military unit intervened. Mercifully, no one was injured or killed – no disciplinary actions arose either, as the staffers bribed witnesses to keep quiet.

Custer’s CEO was paying himself $3 million annually, and company staff on-the-ground lived in supreme luxury, their complexes replete with swimming pools, air conditioning and wireless internet – meanwhile, US troops often stayed in tents and abandoned buildings. In 2004, a consultant to the firm came across an internal document that exposed gross overcharges, provision of fake leases and bills, and use of false front companies by Custer. The company was barred from receiving any further US government contracts, and fined a meagre $10,000.

Still, those repercussions are positively seismic when one considers no major US defense contractor has to date ever suffered significant financial or criminal consequences for their work – or lack thereof – during the War on Terror. What’s more, there’s no indication any lessons have been learned in Washington – quite the opposite, in fact. The report notes the sector has “ample tools at its disposal to influence decisions over Pentagon spending going forward.”

Foremost is a vast and extremely well-funded lobbying effort. Defense contractors have provided $285 million in campaign contributions since 2001, with a special focus on presidential candidates, Congressional leadership, and members of the armed services and appropriations committees. Moreover, these firms have spent $2.5 billion on lobbying since 9/11, each employing over 700 lobbyists annually over the past five years on average, more than one for every member of Congress.

Many of these lobbyists, the report states, have passed through a “revolving door” from jobs in Congress, the Pentagon, National Security Council and other agencies key to determining the size and scope of the US military budget. Company chiefs openly brag about their effective purchase of lawmakers – in October 2001, Harry Stonecipher, then-Vice President of Boeing, declared that “any member of Congress who doesn’t vote for the funds we need to defend this country will be looking for a new job after next November.”

With the War on Terror now seemingly over, “exaggerated estimates of the military challenges posed by China have become the new rationale of choice” for defense contractors, as they seek to bloat the already unbelievably voluminous US defense budget even further.

In 2019, the National Defense Strategy Commission published a scaremongering report, which proposed three to five percent annual growth in the Pentagon budget to address the purported threat of China. Ever since, those figures have become a mantra for hawks in government, think tanks and the media – as the report notes, nine of the 12 members of the Commission had direct or indirect ties to the arms industry.

One can’t help but be reminded of President Eisenhower’s farewell address, in which he offered a prophetic – and clearly unheeded – warning about the ever-growing power of the defense sector.

“We have been compelled to create a permanent armaments industry of vast proportions. Added to this, three and a half million men and women are directly engaged in the defense establishment. We annually spend on military security alone more than the net income of all US corporations,” he reflected. “The total influence – economic, political, even spiritual – is felt in every city, every statehouse, every office of the federal government…We must guard against the acquisition of unwarranted influence, whether sought or unsought, by the military-industrial complex.”