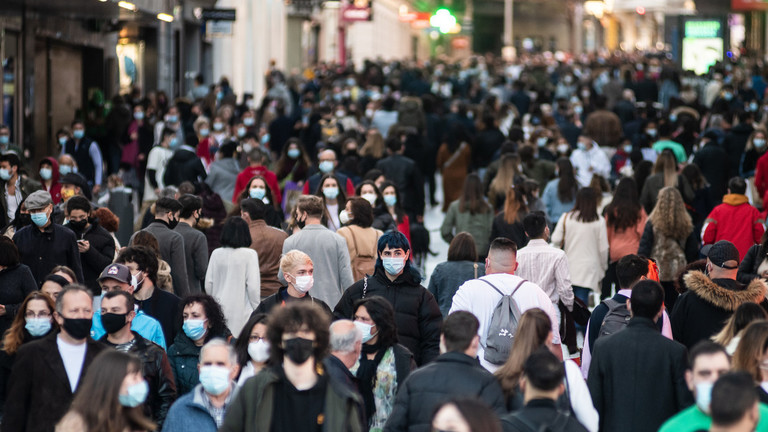 The probability of facing a pandemic like that caused by the recent ‘novel’ 2019 coronavirus once in a lifetime is very high, researchers suggest, and common, global reaction mechanisms should be put in place now.

The Omicron variant is not the first Covid-19 mutation to challenge current response strategies. Still, when it came into the spotlight several weeks ago, it looked like we were back to square one. Panic, travel disruption, tightened restrictive measures, and every country deciding on its own how far it can go to try to stop the spread.

According to Marco Marani, Professor at the Department of Civil, Architectural and Environmental Engineering at the University of Padova in Italy, humanity just snubbed a threat that has long been there.

“​​I’m an engineer and I deal with statistics of extreme events. That’s why I became interested in the probability that we would see a similar pandemic again,” he tells RT. “I was surprised to find that, apparently, no one asked that question, the data was not there.”

Together with several other experts he decided to identify people’s chances of facing a pandemic like Covid-19. He says that he could find all the data available, but it was all scattered. “Epidemiologists are focusing on malaria, yellow fever. They are understandably specializing in certain diseases,” Marani points out. “But the general question regarding a pandemic occurring regardless of the specific disease, that particular question appears not to have been asked. We do have the information, but it was not put together before.”

The team analyzed the data starting from 1600 to the present, looking at the most deadly diseases that hit humanity. And the conclusion they came to is quite concerning, to say the least.

“If we speak about a lifetime, it becomes a very large number,” Marani explains. “For those born in the early-2000s, the probability is 38%. It’s a very likely event.”

Would you bet all you have on a 40% chance of losing it all? I would not, honestly. That’s what we’ve been doing by not being prepared. That was simply not understood.

It’s an alarm bell, the professor warns. Our children have at least a 38% chance of facing another pandemic during their lifetimes, and it’s something that should make people hurry and get prepared, no matter that the fight against the current pandemic is still ongoing.

In the 20th century people faced an exceptionally deadly Spanish flu pandemic that lasted for three years. For Marani, very few lessons were learned from that. Human memory is too short and it leads to the consequences that could have been prevented. “I see a parallel with floods: it’s incredible to see how you have a big flood, and 50 years after that the memory is lost, even in the area where it occurred, people start building back where they shouldn’t be building back.”

Omicron still here: How should we face it?

The World Health Organization came up with the same idea that the response should be a joint one. At the beginning of December, the WHO announced its latest initiative, dubbed ‘Pandemic Treaty’ by the media. The body has launched “a global process to draft and negotiate a convention, agreement or other international instrument” to strengthen universal “pandemic prevention, preparedness and response.” WHO Director-General Tedros Adhanom Ghebreyesus pointed at the states’ “Me-First approaches” as one of the weak points of current anti-Covid actions.

Still, it’s all just a plan. According to specialists, a common approach would be very helpful, but let’s face the reality: to fight the future enemy we all need to get rid of the current one first.

The main problem with Omicron, the new Covid variant, is the high number of new mutations that would potentially allow it to spread faster, Professor Jose Antonio Lopez Guerrero at the Department of Molecular Biology at the Autonomous University of Madrid explained to RT. Luckily, those infected show only mild or moderate symptoms of the disease. Also, no deaths caused by the new strain have been reported so far.

What can be done to stop it? “To restrict flights from the most affected cities – well, that shouldn’t be the only one measure put in place. And we shouldn’t put too much pressure on the countries that report new variant cases,” Lopez says. “Strict control of those coming from the hotspots is needed, for sure. But we also should reinforce the restrictions that may have been relaxed, like the use of masks, distancing, and mandatory ventilation of places.” But above all – vaccination. “No matter the virus may overcome the effect of the jab, vaccination is crucial,” he insists.

Article from Get short URL