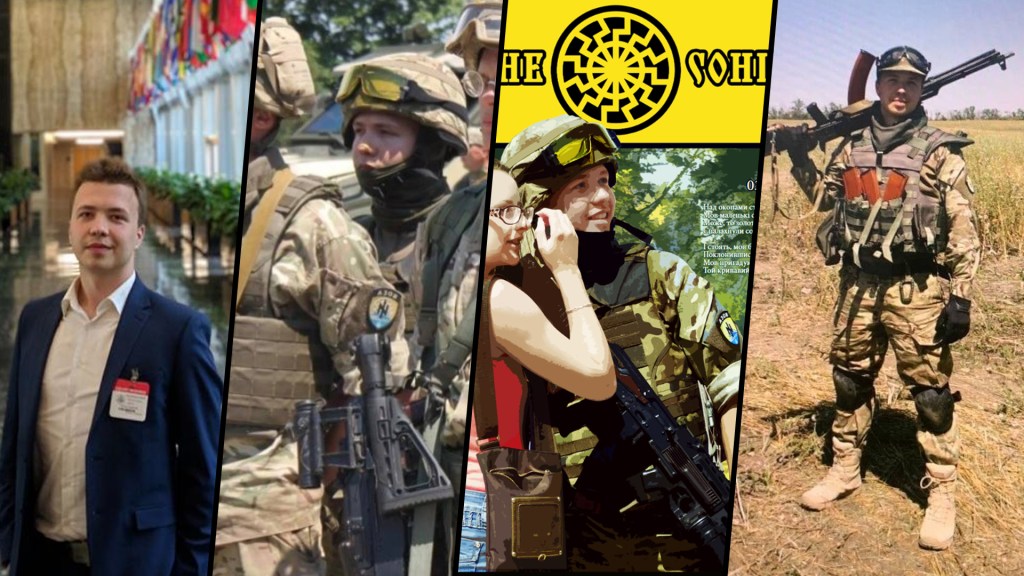 Belarusian regime-change activist Roman Protasevich, whose arrest on a grounded plane caused a global scandal, joined Ukraine’s neo-Nazi Azov Battalion and was cultivated by the US government’s media apparatus.

Ahigh-profile Belarusian regime-change activist whose detention on a forcibly grounded airplane caused an international scandal has extensive links to neo-fascist groups, which his political sponsors in Western capitals have conveniently overlooked.

Right-wing activist Roman Protasevich was traveling on the Irish airliner Ryanair on May 23 when the plane crossed into Belarusian airspace and was ordered to land by state authorities. Protasevich was subsequently taken off the aircraft and arrested.

The incident triggered a wave of denunciations by Western governments, and a new round of aggressive sanctions on Belarus. Many anti-interventionist critics pointed out the hypocrisy of the US government’s condemnations, recalling how, in 2013, it forcibly grounded the plane of Bolivian President Evo Morales in an egregious violation of international law because it wrongly suspected he was harboring NSA whistleblower Edward Snowden.

What they refused to acknowledge is Protasevich’s recent history serving with a neo-Nazi militia in Ukraine, and his extensive ties to other far-right extremist organizations.

Protasevich personally admitted in an interview to traveling to Ukraine and spending a year battling pro-Russian forces in the eastern war zone of Donbas. He is even suspected of possibly posing with an assault rifle and a military uniform on the front of Azov’s propaganda magazine, which is emblazoned with a large neo-Nazi symbol.

The influence of Azov and similar ultra-nationalist groups in Ukraine has extended well outside of its borders, spilling over into neighboring countries in Eastern Europe, while also influencing politics in Canada and even Hong Kong, where Azov extremists joined a Western-backed “color revolution” operation targeting China.

Like Azov, Protasevich has benefited from direct support from Western governments. Just as the neo-Nazi Ukrainian militia received weapons and military training from the United States in order to fight in its proxy war against Russia, Protasevich’s media career was launched by a US government-backed outlet, Radio Free Europe / Radio Liberty, which was created by the CIA as part of an information war against Moscow.

Roman Protasevich is among the most high-profile Belarusian opposition figures to be cultivated by Western governments in a regime-change operation targeting their home country.

In 2020, a protest movement in Belarus quickly morphed into a Western-backed attempt at a so-called color revolution. It aimed at overthrowing the government of President Alexander Lukashenko, a former Soviet collective farm director who has ruled Belarus since 1994 and maintained some Soviet-style policies, while pursuing friendly relations with Russia and China.

To the chagrin of the US and its EU allies, Lukashenko has overseen a relatively state-led economy with greater public ownership and more robust social programs when compared to his post-Soviet neighbors, which imposed neoliberal shock therapy and integrated their political and economic systems into NATO and Western financial markets.

While imposing suffocating economic sanctions on Belarus, the US government and European Union member states have poured millions of dollars into anti-Lukashenko groups, particularly media outlets, while helping to establish a parallel government in exile, called the Coordination Council, led by NATO-backed opposition figure Sviatlana Tsikhanouskaya.

A pair of Russian pranksters posing as Tsikhanouskaya tricked top officials from the US government’s National Endowment for Democracy (NED), a CIA front that funds opposition groups in countries targeted by Washington for regime change, into admitting that they had trained and funded the leaders of the attempted Belarusian color revolution.

“A lot of the the people who have been trained by these [NED] hubs, who have been in touch with them, and being educated, being involved in their work, have now taken the the flag and started to lead in community organizing,” stated NED Senior Europe Program Officer Nina Ognianova, who previously served as the Eurasia program coordinator at regime-change lobby group the Committee to Protect Journalists (CPJ).

“We don’t think that this movement that is so impressive and so inspiring now came out of nowhere, that it just happened overnight. But it has been developing, and we have our modest but significant contribution in that by empowering the local actors to do the important work,” Ognianova openly told the Russian pranksters, known as Vovan and Lexus.

Also on the prank call was Carl Gershman, the decades-long president of the NED, and a former activist on the American anti-communist, social-democratic left who later became a Reagan-era neoconservative and has led the CIA front since 1984.

Thinking he was speaking with Tsikhanouskaya – the Belarusian version of Venezuelan coup leader Juan Guaidó – Gershman outlined the extensive support the US government’s regime-change arm has provided to the Belarusian opposition, and particularly its media apparatus:

We have four institutes, and I think all of them are active in Belarus. Two of them I think you know well, because they work very, very closely with you and your team and the Coordination Council, and that’s NDI [National Democratic Institute] and IRI [International Republican Institute], our two party institutes.

And they’re under the NED umbrella, and we fund their work, you know, that works on strengthening parties and their messaging, their public outreach, their communications. And I know that they’re working with you [Tsikhanouskaya] and your team very, very closely.

And we also have a business institute that’s associated with our Chamber of Commerce in the United States, the Center for International Private Enterprise, that we have funded to work with the private sector in Belarus, to set a vision and a framework for a post-Lukashenko private economic recovery of the country.

And the critical area here, first of all, is free media. We support the journalists … We support people if they have to flee the country, we support their temporary stay in other countries, and all the needs that they have.

Roman Protasevich is one of the main Belarusian infowarriors whose career has been cultivated by the US government.

Following his arrest, Franak Viačorka, a top Tsikhanouskaya advisor who has also long been funded by Washington and its soft-power arms, tweeted that he and Protasevich had worked as “Havel fellows” at the US government’s propaganda arm Radio Free Europe/Radio Liberty (RFE/RL).

RFE/RL, which was originally called Radio Liberation from Bolshevism, was founded by the CIA to function as an information warfare weapon against the former Soviet Union, and continues playing the same role against the Russian Federation today.

Besides his stint at Washington’s RFE/RL, Protasevich also worked at European Radio for Belarus, a right-wing outlet funded by the governments of the United States, Poland, Netherlands, and Lithuania.

Viacorka noted that his friend had run a popular opposition propaganda channel on the messaging app Telegram, called Belamova, which was created by another US government-funded Havel fellow, Ihar Losik.

Protasevich fits the precise profile of the foreign-based Belarusian infowarriors funded by the US government, as NED President Carl Gershman had admitted: “We support the journalists … We support people if they have to flee the country, we support their temporary stay in other countries, and all the needs that they have.”

Through the attempted color revolution, Protasevich has collaborated closely with Tsikhanouskaya, coordinating messaging for her regime-in-exile.

Immediately before his detention, Protasevich was in fact with Tsikhanouskaya in Greece for an opposition conference. He served as her photographer, taking photos of the Belarusian opposition leader as she met with top Greek officials, including President Katerina Sakellaropoulou.

Protasevich subsequently flew from Athens to Vilnius, Lithuana, the base of Tsikhanouskaya’s parallel government, when his plane, Ryanair flight 4978, crossed into Belarusian airspace and was ordered to land, and he was arrested.

The European Union forcefully condemned the arrest. Ursula von der Leyen, the president of the EU Commission, called on Belarus to release Protasevich, while publicly offering the opposition a €3 billion ($3.67 billion USD) “investment package” if they overthrew Lukashenko – essentially bribe money to grease the gears of regime change.

US Secretary of State Antony Blinken called the grounding of the airliner a “brazen and shocking act.” The State Department released a statement lionizing Roman Protasevich as a brave “journalist” representative of “independent media,” and former CIA agent-turned-State Department spokesman Ned Price demanded the “Lukashenka regime” release him.

While Western governments and corporate media outlets have vigorously marketed a Hollywood-esque portrait of Protasevich as a plucky grassroots reporter challenging a thuggish dictator, there is more to the story than the simplistic Western narrative has allowed.

The Ukrainian newspaper Mirror Weekly published a report on May 24 acknowledging that Protasevich had served in the press service of Ukraine’s neo-Nazi Azov Battalion.

Ivan Katchanovski, a political scientist at the University of Ottawa and expert on Ukraine, noted that Western media outlets have totally ignored Protasevich’s work with the notorious neo-Nazi militia.

Following the reports, Andriy Biletsky, a Ukrainian neo-fascist politician and former commander of Azov, confirmed in a Telegram post that Protasevich had indeed fought alongside the neo-Nazi militia.

Biletsky said Protasevich was wounded in the fighting with pro-Russian forces, although the former Azov commander insisted that Protasevich was engaged primarily in information warfare and not combat.

Biletsky lavished Protasevich with praise and, warning of the possibility of Belarus unifying with Russia, called on fellow far-right Ukrainians to join Belarusians in overthrowing the Lukashenko government.

Researchers on Twitter uncovered a 2015 edition of Azov’s newsletter, Black Sun, which depicts a man on its cover that some suspect may be Protasevich.

Azov published the issue on its official page on the Russian social media website VKontakte, or VK. It is not confirmed if the soldier in the photo was Protasevich, although facial recognition software suggests he may be.

But the name of the publication, Black Sun, says a lot about Azov’s political agenda. Known as the Sonnenrad, the symbol is a notorious white supremacist emblem first appropriated by Nazi Germany that has since been adopted by neo-Nazi groups around the globe. The image is especially popular as a tattoo, and many fighters in Azov and other neo-fascist gangs in Eastern Europe can be seen with it on their elbows.